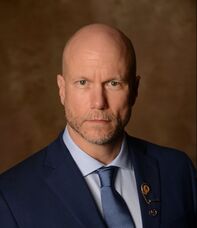 Doug Davis is president of the National Student Nurses' Association. In this position, he is responsible for membership engagement, inter-organizational collaboration, and internal governance. His current objectives are furthering nursing student diversity recruitment and support, as well as a national nursing student wellness campaign. He previously served on the board of directors of the Florida Nursing
Students Association, and as the state legislative and policy chair. Prior to his involvement in nursing, Mr. Davis served as a combat veteran with the United States Army with tours in Asia, South America, Europe and the Middle East working in conflict zones on nation building and indigenous force protection. Mr. Davis is a former member of the New York City Police Department where he worked in the Bronx on Operation Impact. He is an undergraduate nursing student at the University of North Florida in Jacksonville, FL. Upon graduation, he hopes to work in emergency and trauma nursing, while serving overseas in conflict zones with collaborative NGO&#39;s of the World Health Organization.
This initiative is supported by the Robert Wood Johnson Foundation (RWJF).
Photos courtesy of: Emory University Nell Hodgson Woodruff School of Nursing, GW School of Medicine and Health Sciences, and GW School of Nursing.