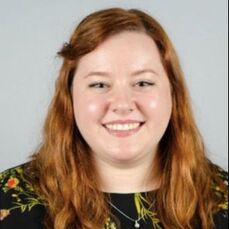 Hannah Hendrix is a third-year medical student at The Ohio State University College of Medicine. She graduated from Wright State University with degrees in Biological Sciences and Women, Gender, and Sexuality Studies. Since 2017, Ms. Hendrix has been a national leader with the American Medical Student Association (AMSA), serving on the Gender & Sexuality action committee, the Wellness & Student Life action committee, and later on the board of regional directors before joining the Board of Trustees this year as president-elect.

Ms. Hendrix believes that AMSA’s emphasis on advocacy is essential for shaping the kind of physician we need–the kind who uses their collective voice to advocate for patients. Her areas of special advocacy interest include reproductive justice, medical education reform, and access to health care.

During her pre-clinical years, she enjoyed directing UltraSound, the OSUCOM a cappella group. She also enjoys reading, hiking—especially near her hometown in Appalachian Ohio—and trying out new DIY projects.
This initiative is supported by the Robert Wood Johnson Foundation (RWJF).
Photos courtesy of: Emory University Nell Hodgson Woodruff School of Nursing, GW School of Medicine and Health Sciences, and GW School of Nursing.