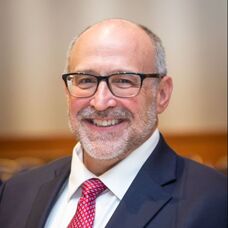 ​Robert A. Cain, DO, FACOI, FAODME, joined the American Association of Colleges of Osteopathic
Medicine (AACOM) as President and CEO in July 2019. Prior to assuming this position, he served as the Associate Dean for Clinical Education at the Ohio University Heritage College of Osteopathic Medicine (OU-HCOM) where he oversaw business development and relationship management for clinical experiences associated with undergraduate and graduate medical education (GME). As part of his GME related duties, Dr. Cain functioned as the Chief Academic Officer for the Ohio Centers for Osteopathic Research and Education (CORE), a statewide medical education consortium. Prior to this university appointment he served as the Director of Medical Education (DME) at Grandview Hospital in Dayton, Ohio (2006-2014) and as the director of the internal medicine residency program at the same facility (1999-2007).
​
Over the past two decades, Dr. Cain has served on a number of local, state, and national committees, task forces, and boards in a variety of roles, including the American Osteopathic Association (AOA) Council on Postdoctoral Training Institutions (COPTI), the AOA Council on Postdoctoral Training (COPT), the American College of Osteopathic Internists (ACOI) Board of Directors, the ACOI Board of Trustees and Executive Committee, the AOA and AACOM Blue Ribbon Commission on Osteopathic Medical Education, and the First Chair of the Accreditation Council for Graduate Medical Education (ACGME) Osteopathic Principles Committee. He also served as President of the Association of Osteopathic Directors and Medical Educators (AODME, now known as the AOGME).

Dr. Cain was inducted into the AOGME Collegium of Fellows in 2018 and has received many other awards for his contributions to osteopathic medical education, most recently the Association of Osteopathic Directors and Medical Educators Leadership Award in 2014. As a specialist in pulmonary medicine, Dr. Cain graduated from OU-HCOM in 1988 and operated a private practice in Ohio from 1994-2008. Originally board certified in both internal medicine and pulmonary medicine, he was recertified by the American Osteopathic Board of Internal Medicine (AOBIM) in pulmonary medicine in 2018.
This initiative is supported by the Robert Wood Johnson Foundation (RWJF).
Photos courtesy of: Emory University Nell Hodgson Woodruff School of Nursing, GW School of Medicine and Health Sciences, and GW School of Nursing.